Clay a different and special short movie
For the super ambitious and artistic short film “Clay”, Deni Jordan has stunt coordinated and taken care of the actors’ safety in collaboration with assistant stunt coordinator Soren Rytter. The film was shot in the remote village of Isafjordur in Iceland, and the surroundings were incredibly desolate and breathtaking and it was an exciting experience to shoot in this remote place. We performed fight coordination, stunt acting and safety work on this beautiful film.

Limited options
By very few means we had to make different scenes such as fights both interior and exterior. Among other things, Søren got a role as a drunkard in a bar where an actor and he have to get into a fight. And in addition, we had a brutal scene with a character having to be run down by a car and that created some challenges since we could not damage the car and then we also did not have a stunt double for the player. But we solved it in a smart way. 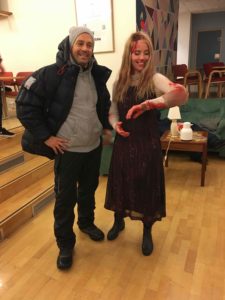 Trailer
Here you can see the trailer for the movie Clay.