The wild action movie Hamlet Pheroun
“Hamlet Pheroun” was shot from november 2018 till end of may 2019 and it was a wild project. We did so many stunts for the movie including wirework, fights, shootouts, car stunts, explosions with and without wires, gunfights etc. Deni Jordan was action director aswell as stunt coordinator on the whole project. He had a great team behind him incl. Judd Wild, Otto Tangstad, Nilla Hansson, Robert Follin, Soren Rytter, Niklas Brennsund, Natasha Ivanova, Kyle Freemantle and Abdella + his egyptian stuntteam.

The filming of Hamlet Pheroun
To make sure we had the best locations we shot the movie both in Lebanon and Cairo.  We had a Syrian stuntteam in Lebanon aswell as us. The cast whom amongst others was Amr Saad Muhammad Lutfi, Ramez Amir  was great.  All the actors were very passionate in learning stunts. We were rehearsing with the actors in order to make them look believable in their fight scenes and gun fight scenes. We did weapon and fight training with them. Both the cast and crew did some kickass stunt performances which made the action director proud.

The cast of Hamlet Pheroun
Furthermore we had Mike Tyson and Hafþór Júlíus Björnsson as the foreign stars in the movie. Producer was iconic Mohamed El Sobky. The director of the drama was Raouf Abd El Aziz.
A lot of the shooting took place in Cairo Media Production City . There we had the possibilities and liberties to blow cars and building up. In the production city we could easily blow 5 stunt people up while pulling the with wires plus we had a car exploding simultaneously. 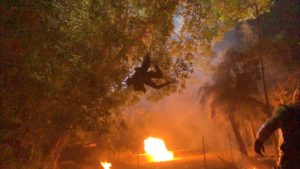 Loads of action
Hamlet Pheroun was one of the bigger, harder and more fun projects that we have done in the past years. My friend and action producer Mohammed Romani  was essential in making sure we had the best possible options to do the crazy stunts. The producer Mohammed El Sobky who also was a great character gave us no limitations.  He just wanted more and more action which we of course provided him …gladly. For further info on Egyptian action movies you can also read our post here