Altibox commercial no.2
The commerical is directed by infamous the Racka Racka twins  and has the world champion in chess Magnus Carlsen acting in the commercial 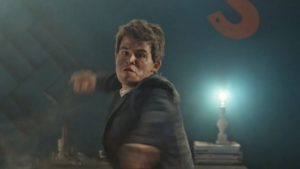 Full of stunts
The commercial is super crazy and is full of stunts performed by Judd Wild (Mad Max – Fury Road) and Otto Tangstad.

Stunt coordinator by chance
The job as coordinator happened cause of a random meeting in a bar in Norway between the Racka Racka boys and their stunt coordinator Judd Wild and Deni Jordan, who was filming the NRK series Monster at the same time in Oslo.

Racka Racka had already filmed the first commercial for Altibox and were going to start the next one. Judd and Deni clicked almost immediately and decided that they would love work together. Judd asked Deni if ​​he could coordinate Altibox commercial no. 2  since Judd had to do a lot of stunts in it and it can be hard to be in front and behind the camera at the same time. Jordan said yes to that without hesitation.

Wild footage
The commercial was shot 2 days later at a breakneck pace over 14 hours with a lot of stunts incl. wirework with Judd flying and rotating through the air and Otto who jumps off a springboard and smashes through a real table. Good times 🙂 Since the Racka boys themselves have edited the commercial there is a 100% guarantee for kickass action.

All in all, a super job. See other wirework jobs here