The setup
The idea was that it should be like the movie “Heat” – the armored van robbery just with a smaller budget and without a special effects department to cooperate with our stunt departement. The truck had to come driving at high speed and hit the armored van which had to smashed and fly down the road sideways. 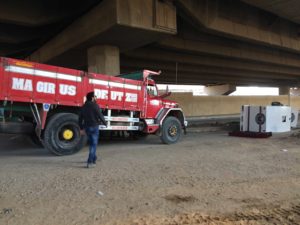 The problem
There were several factors that we needed to take into account for this big truck stunt. First, they had built the armored van far too solid so stunt coordinator Deni Jordan asked them to do something about this in order for us to make it fly further down the road. The actual collision was a direct 90 degree collision, which meant that the impact for stunt driver Soren Rytter would be quite hard and therefore we insisted on getting a 5 point harness rigged in the truck. The owner of the truck was not happy about that, but we did it anyway.

The result
After much discussion about specifics and how, when, where –  the stunt coordinator made a decision and the result was extremely cool.  Almost a little bit better than Heat 🙂