The idea for the ET bicycle wirework gag was  that we had an actor who had to come riding on his bike and then suddenly start to fly as in the movie ET. It was a complicated task that Fiksern in Norway had been given, but where he had hired European stuntteam to help him with the wire setup.

We have previously made complicated wire sequences such as this one for Altibox.

Here is a picture from one of our tests for the tricky wirework solution in which we ended up making a long wire setup to do the whole thing in one shot as requested by the director. 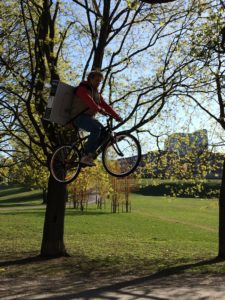 After a lot of rehearsals and some adjustments, we finally got the setup in place and it turned into a little cool commercial as you can see here.