Nothing but great taste was a live event for the Danish chocolate drink Cocio. The job was to make an event with a daredevil for a lot of Cocio’s distributors.

Here is a picture of the ramp we used to drive the scooter up to be able to jump over the van. 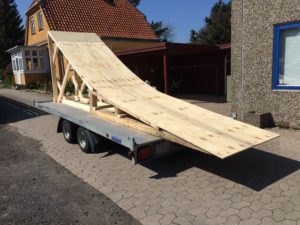 We pretended that we had hired a Russian daredevil to jump over a van and the idea was that he was supposed to fail with the stunt since in comparison to red bull Cocio do not give you anything else but great taste.

Below you see us doing a test on the stunt we were later to do for Cocio’s sales people.